Commissioner Louis Sola continued his examination of COVID-19 impacts to the southern Florida economy and the region’s cruise industry infrastructure when he met with the senior leadership of Port Everglades Monday.

Jonathan Daniels, Chief Executive and Port Director, and Glenn Wiltshire, Deputy Director, hosted Commissioner Sola for a facility tour and a conversation about how Port Everglades is managing through lost cruise business and preparing for the eventual resumption of passenger vessel sailings.  The cruise industry generated $59.4 million in Fiscal Year 2019 for Port Everglades, representing fully one-third of the port’s total revenues.

Port officials used the example of the Celebrity Apex, a vessel delivered earlier this year and now tied up at the port while its crew trains for the ship’s eventual deployment, to illustrate the economic impact of lost business.  Prior to cessation of cruise operations, the Apex was supposed to make 25 homeport calls at Port Everglades in Fiscal Year 2021.  Those sailings would have resulted in an estimated 140,000 passenger movements that would have generated approximately $2.1 million in direct revenue to the port.  Port officials said that the Apex represents less than four percent of total planned passenger moves.

While the cessation of cruise sailings has led to lost revenues for this year, Port Everglades executives told Commissioner Sola they are focusing on the growth opportunity the sector represents over the longer term.  Key to their business plans is upgrading physical infrastructure within the port that serves the cruise industry.  The projects being pursued are designed to accommodate larger cruise vessels and increase operational efficiencies.

During his visit, Commissioner Sola toured two of the many ongoing capital projects that support the cruise industry.  The “Heron Garage” is a $117 million construction project nearing completion that will support two of the port’s cruise terminals with 1,800 parking spots.  He also inspected an existing terminal being retrofitted to accommodate the cruise passengers in an environment that incorporates all appropriate safeguards to reduce risk of exposure to harmful pathogens.

Port Everglades also serves the container shipping industry and during his visit, Commissioner Sola toured the Southport Turning Notch Extension project which is being undertaken to serve more and larger cargo ships.  The $470 million project is scheduled to be completed by 2022.

“Florida is the home to America’s passenger cruise industry, a business that is a vital economic driver to cities throughout the state.  The briefing provided by the Port Everglades leadership was beneficial for my ongoing work on Fact Finding 30.  I am also grateful for the discussion we had about the cargo business at their facility and how trade growth will benefit southern Florida,” said Commissioner Sola. 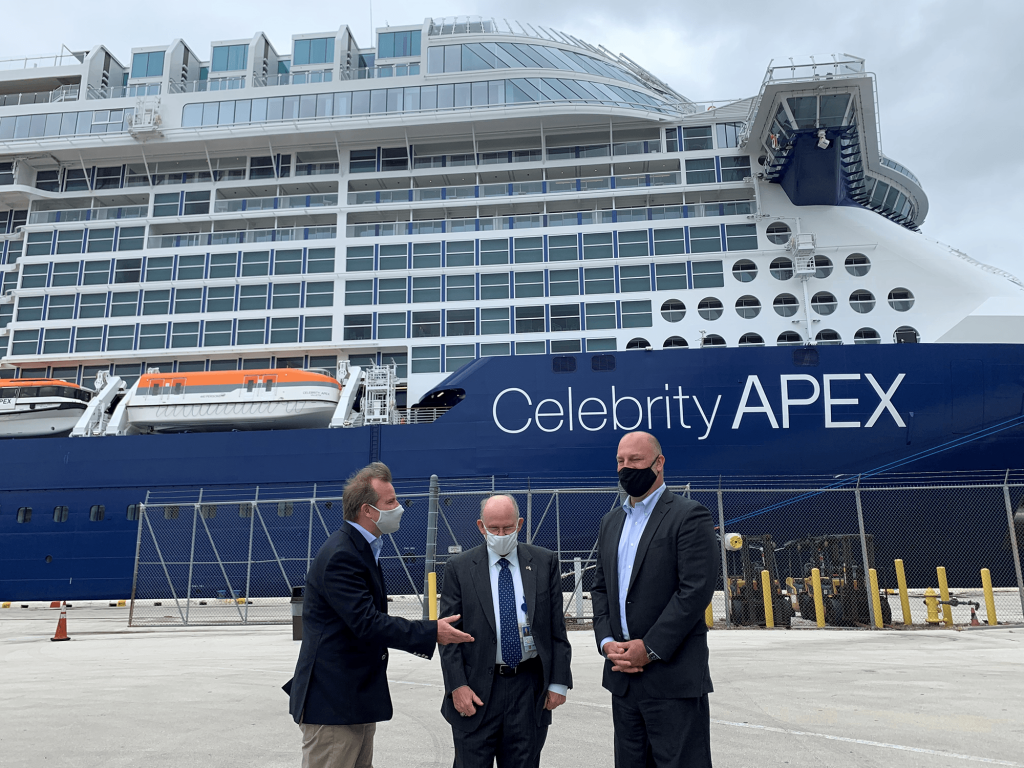 Commissioner Louis Sola (L) speaks with Jonathan Daniels (R) and Glenn Wiltshire (C), both of Port Everglades. The Celebrity Apex, delivered earlier this year, is homeported at the facility for the winter.