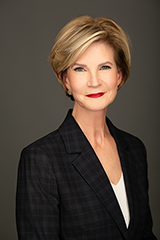 Prior to her appointment to the FMC, Commissioner Dye was Counsel to the Transportation and Infrastructure Committee of the U.S. House of Representatives. She held that position from 1995 until 2002. As Counsel, she provided advice to Members of Congress on issues pertaining to commercial shipping, international maritime agreements, oil pollution, maritime safety and law enforcement, the Federal budget process and Federal financing.

Commissioner Dye comes to the Commission with an extensive background in maritime matters. She began her Federal career as a commissioned officer and attorney in the Coast Guard’s Office of the Chief Counsel, then served as a law instructor at the Coast Guard Academy. After two years as an attorney at the U.S. Maritime Administration, she joined the staff of the former Committee on Merchant Marine and Fisheries, and served there as Minority Counsel from 1987 to 1995.

Remarks of Commissioner Rebecca Dye at WESCCON in San Diego

Hello, thank you for inviting me to be with you today. It’s good to see you all again!  Our Managing Director, Lucy Marvin, is also here and will speak to you tomorrow.  She’ll give you more details about OSRA rulemakings and our implementation schedule. For about 8 years, I’ve been… Read More »

Testimony of Rebecca F. Dye Commissioner Federal Maritime Commission Before the Committee on Commerce, Science and Transportation United States Senate Good morning, Chair Cantwell, Ranking Member Wicker, and Members of the Committee. Thank you for the opportunity to appear with my colleague Chairman Maffei and discuss issues relevant to the… Read More »

Thank you so much for inviting me to be here today. What a pleasure to be with you…really with you! I read that Nassim Taleb, author of the Black Swan, said that the global pandemic is not a Black Swan, because we had prior warnings … But what’s been going… Read More »