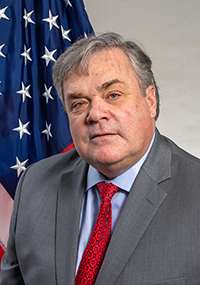 Prior to his appointment at the Federal Maritime Commission, Commissioner Bentzel created and established a consulting services company where he represented clients on regulatory and legislative issues within the areas of transportation, energy and other areas of federal regulatory oversight. From 2004-2014, Commissioner Bentzel served as Vice President and head of the federal advocacy division of a full-scale public relations firm, the DCI Group.

Prior to working in the private sector, Mr. Bentzel served the public sector for ten years as a Senate professional committee staffer including, most recently, as Senior Democratic Counsel of the Senate Committee on Commerce, Science & Transportation. He moved to his role in the Senate after spending four years on the House Committee on Merchant Marine and Fisheries Committee where he served as Counsel for Maritime Policy.

Commissioner Bentzel’s primary areas of responsibility on the Senate Committee on Commerce, Science & Transportation were issues on maritime transportation; rail, surface and pipeline transportation; energy transportation and hazardous materials; and homeland security in these areas.  While working in the Senate, Commissioner Bentzel served as one of the principals in crafting the Maritime Security Act of 1996, the Ocean Shipping Reform Act of 1998, and in 2002, after the attacks on 9/11, the requirements mandated for maritime security through the Maritime Transportation Security Act of 2002.  He also dealt with matters impacting economic regulation of rail and surface industries before the Surface Transportation Board, and a variety of energy related regulatory issues.

For his efforts in developing and negotiating passage of Maritime Transportation Security Act of 2002, Commissioner Bentzel was awarded the Coast Guard’s Medal for Meritorious Public Service and the Maritime Security Council’s Man of the Year award.  Mr. Bentzel is also the author of the chapter on Port Security within McGraw-Hill’s Handbook on Homeland Security.

Commissioner Bentzel earned his Bachelor of Arts from St. Lawrence University, his Juris Doctor from the University of Alabama, and his Master of Laws from the Admiralty Law Institute, Tulane University.

After review and consideration of public comment on Section 18 of the Ocean Shipping Reform Act of 2022, I concurred with the staff recommendation that current conditions do not necessitate the issuance of an emergency order. If invoked, Section 18 would have required ocean carriers and marine terminal operators to… Read More »

Commissioners Carl W. Bentzel and Max M. Vekich wrote key Members of Congress to urge changing the law in a way that would allow the Federal Maritime Commission to prohibit filed agreements from automatically going into effect. “Congress provided the Commission with important additional authorities in the Ocean Shipping Reform… Read More »

Commissioners Carl Bentzel and Louis Sola traveled to the Southeastern United States in November for meetings with port officials and industry representatives in New Orleans, Mobile, and Gulfport. The purpose of the trip was to evaluate the region’s inland distribution network and to review alternate port options for international container… Read More »

“I was recently briefed by executives of the Coalition for Reimagined Mobility about a report issued earlier this summer entitled ‘Solving the Global Supply Chain Crisis with Data Sharing‘. The findings they shared with me represent encouraging paths for action to address emissions related to ocean shipping,” said Commissioner Bentzel…. Read More » 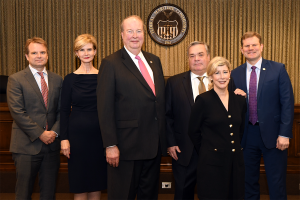 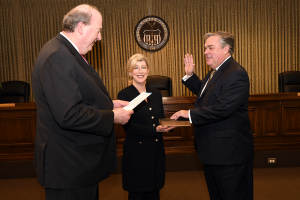 Chairman Khouri (left) administers oath of office to Commissioner Bentzel (right) who is joined by his wife, Suzanne Bentzel (center) 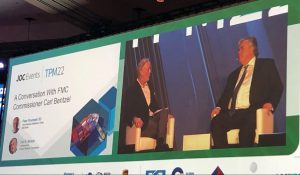 Commissioner Bentzel speaks at the 2022 TPM Conference in Long Beach, on the state of the shipping industry