The “Ocean Carrier Roulette, Welcome to 2017” panel addressed changes in the liner shipping industry and the recent realignment and reduction in the number of ocean carrier alliances. In addition to Acting Chairman Khouri, panelists included representatives of shippers, ocean carriers, and industry consultants. The panel discussed what shippers might expect from the recent ocean carrier industry changes, including future rates, competition, and service.

During the panel’s discussion, Acting Chairman Khouri reinforced his views that the Commission’s role continues to be focused on ensuring competition and the proper working of market forces. In addressing how the Commission might help the industry avoid the problems associated with the bankruptcy of a major carrier, such as Hanjin’s bankruptcy last year, Khouri noted that the industry is finding commercial solutions for these fears.

“What we are seeing so far, is the industry coming up with different ways to address shipper concerns. This is competition. The FMC stands ready to encourage and facilitate industry plans to address shipper concerns about carrier solvency, but I see commercial solutions dictated by the marketplace as far preferable to government regulators trying to impose a ‘one-size fits all’ solution,” Acting Chairman Khouri told the audience.

In addressing carrier alliances, Acting Chairman Khouri reiterated the Commission’s commitment to ensure that the ocean carrier collaborations under the Shipping Act do not become anticompetitive to the detriment of U.S. shippers and marine suppliers. Mr. Khouri noted, however, that alliances provide ocean carriers with flexibility and the ability to achieve cost-savings and efficiencies that potentially benefit U.S. shippers and consumers. He also observed that carrier alliances may help avoid additional carrier mergers. “If too many regulatory obstacles are put in the way of efficient alliance operations, it may unnecessarily result in further industry consolidation, with the next step being four or five megacarriers. I do not think that this is a development shippers would welcome”, Khouri said.

Acting Chairman Khouri also noted the Commission’s recent approval of a final rule amending requirements for Service Contracts and NVOCC Service Arrangements (NSAs) that eased regulatory burdens and reduced the costs of compliance with the agency’s regulations. Khouri said, “It is my goal at the Commission to make a concerted effort to reduce regulatory burdens on our constituents as well as aggressively look for ways to make compliance with Commission requirements easier and more cost effective for shippers, carriers, and ocean transportation intermediaries.” 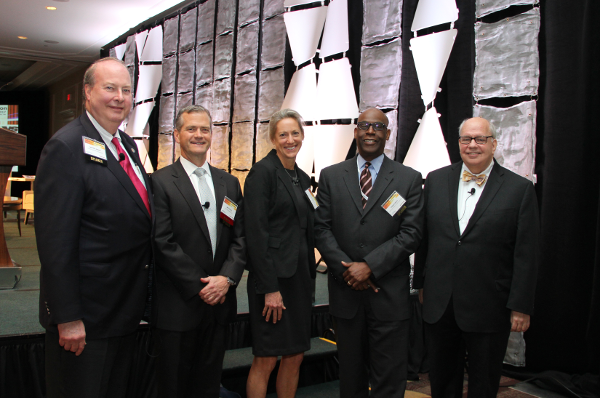