The comments I am about to share with you do not necessarily reflect the views or opinions of my four fellow independent Commissioners. Nor do they necessarily represent the positions of the Commission as an agency or that of the Biden Administration.

California’s busiest port is straining the global supply chain—Bloomberg News.
Waiting on that holiday gift from your online cart?  It might be stuck at a seaport—NPR.
Cargo ships at key US ports could be waiting weeks to dock—Business Insider.
Backlogs at American ports cause broken supply chain – Farm & Dairy Magazine.
Port Gridlock Stretches Supply Lines Thin in Blow for Economies—Bloomberg News.
The Supply Chain Crisis and U.S. Ports: “Disruption on top of Disruption – Financial Times.
The United States has a Port Problem – The Week.
‘It’s Not Sustainable’: What America’s Port Crisis Looks Like Up Close – New York Times.
Why U.S. Ports are some of the least efficient in the world – CNBC.

Reading these headlines from the past year – I just have to say ‘shame on you all.’  According to these, it’s pretty easy to see that you all tried to cancel Christmas and then, failing that, are making all those poor container ship crews wait outside your terminals until someone finally get to unloading them. 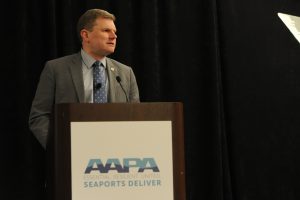 So, my question to you port officials is why have all of your ports, processed so much less cargo than since before the pandemic?  I mean port productivity must have dropped dramatically if all of these headlines are true.

Of course, that’s all nonsense.  America’s ports are NOT broken or, by any historical measure, inefficient.  In fact, the ports are processing even more cargo than ever before.  Coast to coast, almost every major port is breaking records   In Los Angeles alone, 2021 smashed its previous record for most containers handled by 13%.  That translates into 1.5 million more containers than the biggest pre-COVID year and that does not include the neighboring port of Long Beach which has registered similar numbers meaning our largest port complex has processed close to three million containers MORE than ever before.  The Port of New York & New Jersey have similar record.  Coast to Coast, large or and small ports, it is the same story.   Thanks to our port authorities, terminal operators, and waterfront labor including the ILWU and ILA, America processed more cargo through its ports in 2021 than ever before in the nation’s history and they did this despite the lack of many needed infrastructure improvements and during a global pandemic.  That doesn’t sound broken to me.

So why does the media say the ports are clogged or congested or broken?  If I empty the contents of a 20-gallon aquarium into our bathroom sink, it certainly will look broken – but does that mean the sink is broken?

Calling our ports broken or dysfunctional is the equivalent of calling up your plumber and saying that your sink is broken because it is draining 10-20% MORE water than it did before, BUT overflows when the 20 gallons are instantly poured into it.   If you did call the plumber, he or she would tell you the sink is fine, but the sink’s user may have a clogged brain.
The analogy works with the ports right now.  The media (and some policy makers) point to pictures of long lines of hulking mega-ships outside some of our nation’s ports, high stacks of containers, and occasionally show pictures of truck traffic jams taken during some peak hour.  Those pictures can be misleading if seen out of context and certainly don’t give a complete picture of what’s going on.  But it doesn’t sell papers, or attract viewers, or get clicks to tell the complex economic story of America’s overwhelmed supply chain so, in effect, the ports become the fall guy—the one taking the blame.

Of course, there is a quote “crisis” one can see at our ports right now, but it did not originate at the ports and is not because of the ports.  The congestion or backup that we see as lines of ships, high containers, or truck jams is because the demand to move stuff and the capacity of the system to move stuff is way out of whack.  If, in fact, the demand for stuff didn’t change that much but the ports became congested then it would clearly by a problem with the cargo transportation system and we would ask why the capacity to move stuff decreased?  We all know capacity at ports DID suffer at the very beginning of the pandemic due to COVID-related absences and some prudent safety precautions.  Of course, demand for processing cargo also went way down since Chinese and other Asian factories were shuttered and consumers were uneasy.  Then it all changed.

We are all familiar with the story now.  People had to stay home.  Resorts and restaurants closed and COVID risks dropped demand for services.  But the economy did not collapse and – thanks in part to bipartisan stimulus packages supported by both President Trump and then President Biden – people had the confidence to buy things on-line.  And did they buy things.  Demand for consumer goods soared and, once Asia had figured out how to manufacture during the pandemic, the demand for shipping of consumer goods inflated and that balloon has not burst yet.

In trying to process all the cargo, the ports set new records of productivity but quickly ran into blocks inland in the supply chain – shortages of workers, equipment, and warehouse space.  Much of the reason why there are lines of ships is not due to ports not being able to unload the ships fast enough but that there is no place the put the cargo because it is not being picked up and moved out of the ports fast enough.  Using our sink analogy, the sink might be draining great but that doesn’t do you much good if the whole sewer system is backed up.

Nonetheless, even while the ports have increased productivity, many port directors and some terminal operators have found creative ways to help cargo to move quicker.  Pop-up yards, extended gate hours, container peel-off programs, improved appointment systems, new ways of running chassis pools, and better data sharing are just a few examples of the commitment to innovation we have seen from port directors.

I for one, welcomed the news that President Biden was sending the former deputy secretary of transportation, John Porcari, as his envoy to the San Pedro Bay ports.    He convened groups of stakeholders that took positive action to clear out empties and move along stuck cargo.  You might quibble with some of the methods used – such as a threatened container dwell fee – but the end result was better movement through the ports.

We at the Federal Maritime Commission have done what we can within our statutory authority to help ports and port users.  These include:

Even my former colleagues in Congress have already taken substantive – and bipartisan – steps toward making things better.  The bipartisan infrastructure bill will allow for much needed investment in improving and expanding the port and domestic networks needed to move freight.  There is no question that Port Infrastructure Development Program funds will help make a difference.  Finally, it is encouraging to see bipartisan and bicameral support for legislation that will provide the Federal Maritime Commission with more authorities.  I applaud the commitment of the Senate and the House of Representatives to improving conditions for shippers and consumers.

These are all positive steps, but I do not want to overstate the ability of any one group – whether the federal government, port directors, or even the carrier industry to solve the problem quickly.

The bulk of the letters I receive demand that the FMC do something to BOTH lower the cost of ocean shipping AND reduce the congestion.  But, even if all of the proposals introduced in Congress were to be enacted, the FMC still wouldn’t have the power to lower freight rates per se or force the sort of behavior changes that would reduce congestion.

In fact, while I am in no way exonerating the carriers and their alliances from taking advantage of the situation to make money, it’s clear that the post-COVID boom in demand for consumer goods has outstripped the supply of cargo capacity – both on the sea and even more so on trucks and trains and in warehouses.  Were we to find that the carriers were purposely limiting capacity in order to artificially raise prices, we could and would take action to stop them.  That may yet happen, but so far, it appears that virtually all of the container carrying ship capacity in the world is being utilized.  The carrier lines even have ordered more ships.  But even if those ships hit the water today, the added capacity on the ocean would probably just increase the lines of ships waiting to be unloaded.  And more ships doesn’t solve the problem of chassis shortages, mispositioned containers, inefficiently utilized rail, and lack of truck drivers and warehouse workers.

Changing the shipping laws will allow the FMC to better go after those actors in ocean shipping taking unfair advantage of the situation – by charging unreasonable detention and demurrage or refusing export cargo in favor of a quicker turn around for empty containers.  But even a bipartisan coalition in Congress can’t repeal the laws of economics and those laws tell us that when demand overwhelms supply, congestion is an unavoidable reality.

Nonetheless, just because it’s not your fault (or my fault either), doesn’t mean we—and I mean all of us—ports, terminal operators, carriers, shippers, freight intermediaries, and government have no responsibility to make things better.  As my colleague Lou Sola has said, the situation “is nobody’s fault … But EVERYONE is responsible.”

We at the FMC will keep doing our part but I am here today to thank you port officials for continuing to do all you can to lessen the crisis that there is and provide the more efficient service possible under the circumstances.  You have indeed made things better.

Daniel B. Maffei is a Commissioner with the U.S. Federal Maritime Commission. The thoughts and comments expressed here are his own and do not necessarily represent the position of the Commission.