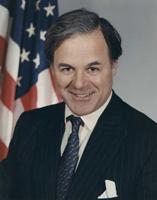 COMMISSIONER ANTONY M. MERCK was sworn in as a member of the Federal Maritime Commission in January 2000, and served with the Commission until December 2001.

A resident of Charleston, South Carolina, Commissioner Merck is a graduate of the University of Virginia and received his law degree from the University of South Carolina. He served in the United States Marine Corps from 1962 to 1965 and the United States Coast Guard from 1966 to 1970, earning honorable discharges from both services. As partner then later as counsel, he practiced law with the firm of Buist, Moore, Smythe & McGee in Charleston, South Carolina from 1973 to 1994. While in practice, Mr. Merck focused primarily in admiralty and maritime law, representing shipowners and protection and indemnity clients. More recently, Mr. Merck has been involved in investment management and with several non-profit organizations related to health care and natural resource conservation.

Mr. Merck has been affiliated with a variety of maritime-related associations which include: the Maritime Association of the Port of Charleston; the Lowcountry International Trade Association; the Trident Chamber of Commerce and its International Trade Task Force; the Propeller Club of the United States, Port of Charleston, South Carolina chapter and Port of Washington, D.C. chapter; and the Southeastern Admiralty law Institute. Since 1980, he has been a Proctor member of the Maritime Law Association of the United States.